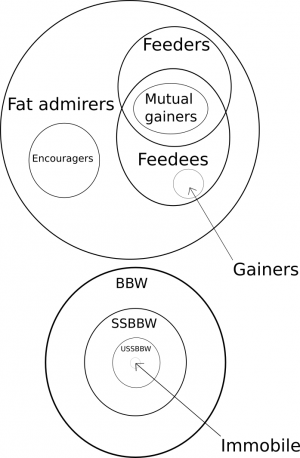 Feedism or feederism is the practice of feeding a partner, primarily but not necessarily done with the goal to increase their weight. It can be practiced at any body size, but is mostly done by people where at least one of the partners is already large.

Feedism (or feederism) and gaining is, in many cases, the focus of web models, with eating and stuffing videos followed by videos celebrating higher and higher weigh-ins.

Feederism is the most used term for this concept, but some people prefer feedism to note that it is not primarily about the feeder, but also the feedee.

A Feeder is someone who encourages the feedee to gain weight, but they don't gain weight themselves

Feedee Xutjja with her feeder boyfriend

A Feedee is someone who enjoys the idea or act of growing bigger or fatter. Often they are the recipient of the action done by their partner, the "feeder." In the gay community, feedees are often referred to as "gainers."

As a sexual orientation, it is a natural extension for BBWs, SSBBWs and FAs. Many feedees experience sexual gratification and a romantic bond through feeding fantasies and/or actions. 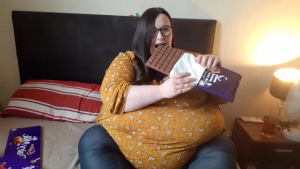 Weight gain can be practiced alone

In denial of weight gain[edit]

Denying the fact that you or your partner has gained weight can give sexual arousal. It is a common thing that has to be done outside feederism by gaining people to hide the fact that they have gained.

Having a high body weight can be dangerous to your health. There are ways in which you can avoid this and still be fat, but the heavier you are, the higher the risks can be.

Old websites on the early web had sections devoted to the fledgling idea of feedism, such as Betsy's "Food Fantasies" movie and "The Weight Room" on Dimensions Magazine's website, or entire websites, such as Feeders.co.uk.

Feedism MUST always be done with full consent of everyone who is involved. This also includes the usage of derogatory terms.