Mary Boberry (BoBerry) (born June 5, 1985) is a 36-year-old Hispanic (Welsh/Nicaraguan) SSBBW who lives in San Francisco, California, United States. She was a model for BigCuties from 2011 to 2022. She is notable for her large buttocks and surprisingly high degree of mobility and stamina for her size. She has previously stated that she reached 200 pounds by 8th grade and rose into the 400s during high school. She peaked at 550 pounds between the ages of 19 and 21, but began to lose weight soon afterward.

In 2009, she created a profile on Fat Forums and began to post pictures as an amateur. In 2011 (at age 25), she joined the BigCuties network, weighing approximately 460 pounds, and soon started gaining weight again. In 2019, Boberry hit her peak weight of 614 pounds but fans began to notice weight loss in following sets. It has been estimated that she lost a considerable amount of weight, weighing 553 pounds as of her last update.

She has a Feabie and a Tumblr and an (unofficial) Subreddit. Once Tumbler became a family friendly website she joined Instagram, which was a step she always said would never happen. She has stated that her dad is Welsh and her mom is Nicaraguan here.

Video of her weight gain 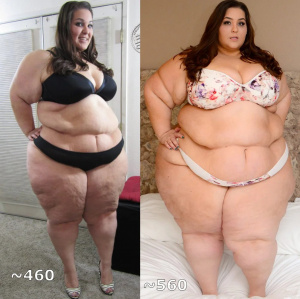