She began her acting career by playing the role of Pumpkin in the 2003 film Muffin Man. Since then, she has appeared in many forms of media, including movies (She Wants Me, Nocturnal Animals), TV shows (1000 Ways to Die), and music videos (Muffin Top Girlz, shown below).

For a short period of time she modeled for Big Hot Bombshells under the name Angel.

Her IMDb page can be found here. 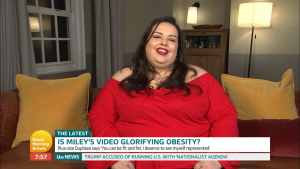 Angeline Duplisea on The Scottish Sun
Retrieved from "https://bbw.wiki/index.php?title=Angelina_Duplisea&oldid=10333"
Categories: