First appearing on the internet scene in 2017, Randalin promptly garnered much attention for her seemingly improbable proportions, with a fairly slender upper body and outsize hips, ass, and thighs. This remarkable trait would hold for the next several years, even as her weight grew.

By the time the pandemic hit in early 2020, Randalin had built up a sizeable following both on social media and on her OnlyFans, and weighed more than 300 pounds. However, the quarantine period saw her actively start gaining weight, and by February 2021, she weighed 401 pounds, with measurements of 44-38-73. 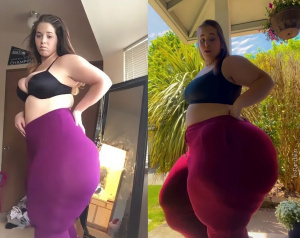 Before and after picture of Love Randalin in 2022

Randalin's growth from her debut to present.
Retrieved from "https://bbw.wiki/index.php?title=Love_Randalin&oldid=10486"
Categories: