She started out as a guest model on HeatherBBW's site before becoming one of the first BigCuties. For a time, she ran her own modeling site, SalaciousSasha.com, but eventually returned to BigCuties. During this time, she opened her own Clips4Sale page. In September 2015, she posted her final video update and unofficially retired from BigCuties.

She began her modeling career at approximately 380 pounds. She weighs 563 pounds as of August 2022. 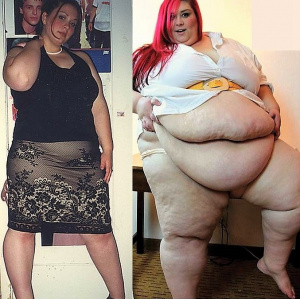 Another photo of Sasha from before and after hers weight gain.
Retrieved from "https://bbw.wiki/index.php?title=Sasha&oldid=10245"
Categories: