Deidra appeared in a episode of "Miami Ink" and also the show "Taboo". She also appeared in a Canadian TV Show "Chris & John To The Rescue". 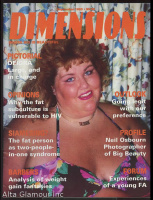 Deidra on the cover of Dimensions Magazine Sept. '93 issue
Retrieved from "https://bbw.wiki/index.php?title=Deidrababe&oldid=7906"
Categories: