Dimensions Online is a complement to Dimensions Magazine which is published bimonthly as a forum for those with a preference for the large figure and the people who attract them. It explains relationships, experiences, fat sex, and sexuality from the unique perspective of BBWs and their admirers and reports on issues of obesity, health, lifestyles, and media perceptions. Dimensions Magazine also provides adult entertainment including fiction and photo features with fat-related themes. Dimensions has hundreds of personal ads from big women and their admirers.

Dimensions Magazine is the name of a now defunct plus-size magazine, as well as a size acceptance community that grew out of the magazine's website. Dimensions Wide Angle Video Productions were sold through Dimensions. They were the original owner of the DimensionsGirls modeling network. 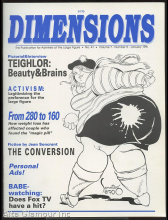 Dimensions Magazine was published by Shardco Inc in Albany, New York, starting in 1984. It was edited by Conrad H. Blickenstorfer. The owner of Dimensions also owned and published Pen Computing Magazine. Most cartoon covers from 1985 onward were drawn by Ned Sonntag, and in 1989 the magazine introduced color pin-up covers of real models using glossy paper with Issue 42. The magazine featured aspiring models, some of whom became successful online in the years following. The publication of Dimensions Magazine ended in 2002 with Issue 88.

Most issues were up to 64 pages with glossy color print, and back issues cost $5.50 each.

Soon after the mainstream adoption of the internet, Dimensions created a website, posting columns and weight gain stories featured in the magazine as well as running competitions for aspiring models for their publication. Elsewhere, a woman known as BBW-QT created a website featuring personal ads for BBWs and FAs, which included a discussion board and a chatroom. The website's bandwidth charges soon became too much for BBW-QT to continue supporting, as the popularity of the forum and chatroom increased dramatically, so a deal was made for Dimensions to absorb the discussion board and chatroom, while BBW-QT closed her site. The new Dimensions community grew and by the late 1990's, Dimensions had become widely regarded as THE online site for fat admiration.

In 1997, the magazine became one of the first regular online magazines. The website began advertising and selling Dimensions Wide Angle Video Productions - soft-core pictorials that featured BBWs. Of these, most heavily promoted was The Feeding Fantasies of Betsy, which introduced feederism to many. They also started DimensionsGirls modeling network, which eventually became part of BigCuties.