Betsy Content Bogert (aka angelovebbw) was a Caucasian SSBBW model in the late 1990's and 2000's, and one of the first publicly known feedees. She was a member of Mensa, NAAFA, and owned two cats: Ustinov and Vincent.

Born in Manhattan, New York, raised in New Jersey and California, she traveled all over the United States, most of Europe, Brazil and the Bahamas. She lived in Monte Carlo, Monaco for one year and spent another near Cape Town, South Africa. She began to gain weight at the age of 9, when her mother put her on a diet, and further gained at 15 when using illegal diet pills. Following years of failed diets and divorce from a husband that wanted her to be a size 12, Betsy accepted herself as a BBW in 1993 at 309 pounds, and there started her incredible journey to the ultra-SSBBW she would become.

Betsy became one of the earliest open feedees on the internet, with her images featured on Feeders.co.uk. She was featured in Dimensions Magazine, BUF Magazine (July '94 issue) and a Wide Angle Video Production titled Dimensions Presents #6: Besty's Food Fantasies - Passion for Food. She eventually opened BBWSanctuary.com, a resource for size acceptance, and SupersizeBBW.com, which featured pictures and movies of her gaining journey. She married a German feeder named Stephen and moved to his home country, where she continued to gain.

At her peak, Betsy weighed over 600 pounds. Around 2003 Betsy's site went offline and she disappeared from internet knowledge. She resurfaced on Fantasy Feeder briefly before her passing in 2012 at the age of 57.

In total, Betsy was featured in four movies chronicling her weight gain journey, from 316 pounds to over 500 pounds, which were formerly available through her website on CD-ROM. 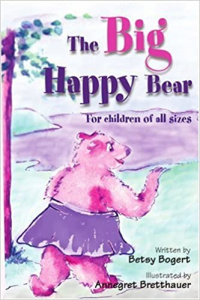 The Big Happy Bear: For Children of All Sizes can be purchased from Amazon here.
Betsy was also a writer and poet, and has been a published author since 1973 including numerous non-fiction articles on size-acceptance, a hardcover book, two screenplays, two teleplays, and hundreds of poems. Betsy comes from a long line of writers; her great-great grandfather was a "poetmeister" in Germany, her grandfather wrote the editorial page for Hearst's Journal American, her mother was an advertising copywriter and teacher, and her daughter, Raven Demers, is a published poet.

In 2002 she penned the children's book The Big Happy Bear: For Children of All Sizes, which is available in paperback on Amazon and digitally on Kindle. The book was written to help fat children with issues of self-esteem.