Kelligrl is a former a Caucasian SSBBW from New Jersey and one of the Internet's first gaining models. She first appeared in 1994 on the cover of BUF Magazine, but did not resurface until the late 1990s; a series of pictures showcasing her gain from skinny to her current weight of over 300 pounds debuted on the Dimensions Magazine website and rocketed her to instant stardom.

She created her own website as well as a new magazine called Bulge and continued to gain weight to a reported peak of 479 pounds (although, due to health complications, she lost some to go back down into the 450s for the rest of her career).

In 2001, at age 34, she abruptly closed her personal website and stopped putting out Bulge. Many theories abound as to what happened next, but the general consensus is that she had weight loss surgery and moved to California, cutting all ties with the FA community.

Reportedly in 2018 or 2019 she created a profile in Feabie and the picture was compatible with an older Kelligrl. According to the profile the person was a feedee living in California, with a weight apparently in the range of 600 pounds. In June 2020 the profile was not there anymore. 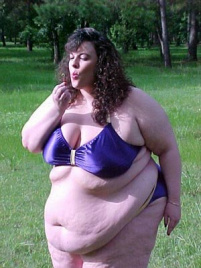 Another picture of Kelligrl near her heaviest