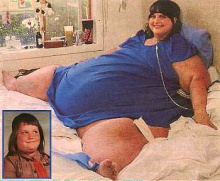 Carol Yager, the heaviest known woman in history.
The Dimensions 900 Club - "The World's Heaviest People" was an article of the Dimensions Magazine website written by Karl Niedershuh, dedicated to showcasing USSBBWs and USSBHMs who weighed 900 pounds or more, making them the fattest people in history.

The following USSBBWs were featured in the 900 Club:

The article can be found here.